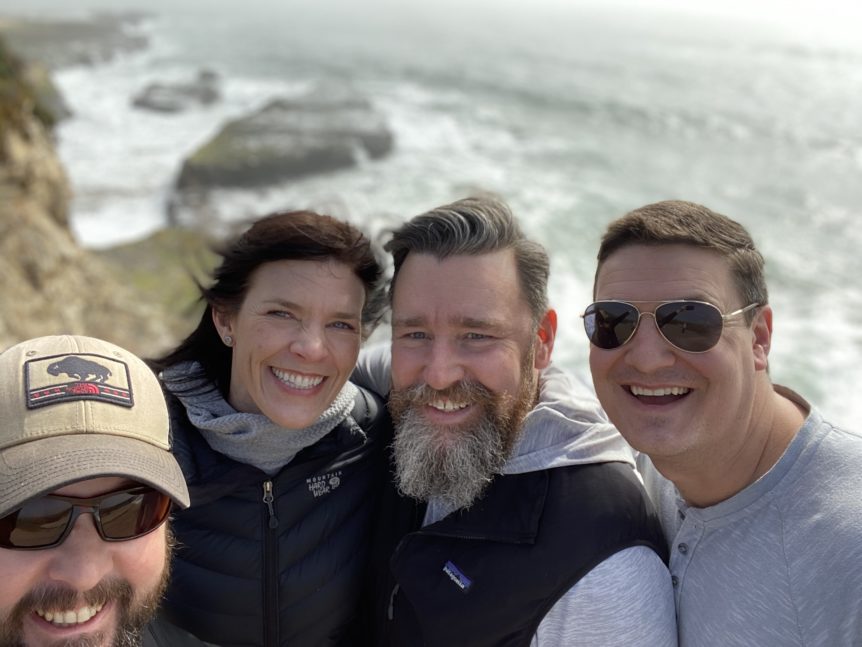 This past weekend, my friend Curt and I traveled to Los Altos, California. We got to spend time with some very dear friends, Justin and Jennifer. We arrived a day before a planned ministry event just so we could soak them up. Justin planned an excursion that we could all do together. They took us to one of their favorite places so we could hike along the Pacific coastline near Santa Cruz.

Before we left their house, Justin suggested we pray and ask God if He had any alternate plans, or anything He wanted to share with us before we headed to the ocean. We all spent a few minutes in silence, and then shared anything we sensed God might be leading us to do. As we shared what crossed our minds, we all had a common theme…the color red. As I prayed, I visualized a man in a red windbreaker, and for whatever reason, I had the impression that this man had weight on his shoulders or a possible shoulder injury. I think we were expecting a simple “yes” or “no” on the plans Justin suggested…not some mysterious overlap of the color red and the detail of some person. So we just went with it. There was no change in plans. We drove about an hour from Los Altos to Wilder Ranch State Park to hike along the Pacific coast.

We arrived, parked our car, got our water bottles, put on our jackets and started hiking down the trail towards the ocean. We were asking each other questions about our childhoods, where we grew up, and asked how Justin and Jennifer met. All of us were engrossed in the stories as we hiked. About ten minutes into the hike, we began to feel the saltwater breeze on our faces and could begin seeing the coast on the horizon. Other hikers and cyclists were passing us every few minutes coming from the direction we were headed. Then we all took a pause… because an older man on a bicycle slowly approached and then passed us…and when he was a good distance from us, I just said, “That’s him. That’s the man in the red windbreaker.” He was too far away in the other direction for us to try and chase him down. We just let him go and determined we didn’t miss anything. As we continued toward the ocean, I asked the Lord about this man and I sensed that he had lost his spouse.

We continued on to the lookouts over the Pacific, taking winding trails that led to one of the beaches. We decided to head north and climb a very steep embankment to get a new view from the high point on the northern trail. Altogether, we spent about 30 minutes on the beach and on the northern lookout, admiring the waves breaking on the rocks and the beach below us. We needed to make a decision: Did we want to continue north? Or did we want to go back the direction we came from and take the southern trail along the coast? I suggested we go south. Afterall, it might be possible for us to run into the man in the red windbreaker. We were probably all thinking, “the man in the red windbreaker is probably long gone” – because he had been biking back towards the parking lot. Nevertheless, we decided to go back the way we had come.

We slowly made our way down to the beach from the northern lookout, and then back up to the other side to the southern trail. Every few hundred feet, we would stop and take in the unique view each lookout presented. We paused on the trail for a moment. Thinking back, I am not sure why we stopped where we did…but I remember turning around and looking back at the trail…and at that exact moment…coming around the corner was the man in the red windbreaker, riding his bike! I walked towards him and gestured that I wanted to ask him a question. He stopped. I told him my name and asked him his name. I also asked if he came here often. He said, “My name is John. I rarely come here because I live north of here and have many acres I enjoy.”

So this is where there was no easy way to get into the conversation. I told John, “This will sound strange…there’s no way around it. We drove here from Los Altos and before we came, we prayed together and got an image of someone exactly like you wearing a red jacket. We feel like we are supposed to pray for you.” John replied, “I am not a religious person, but you can pray for me.” I told him that we saw him earlier on the path, but after he passed us, we couldn’t have caught up with him, and so we waited to see if God would bring us back together again. I asked John if he was married. He told us that his wife had passed away in 2005. He looked at us and said, “This is her red jacket I’m wearing.” We were all getting teary-eyed at this news. I knew God had an appointment with this man and there was a weight on John’s shoulders. I placed my hand on his shoulder, prayed a simple prayer of God’s love for John and blessed him. Justin, Jennifer and Curt joined in with simple, loving words.

Jennifer asked what John’s wife’s name was. He said, “Diana.” As she was connecting with John, I remembered that John may have a shoulder injury. I said, “I forgot to mention that as we prayed back in Los Altos, I had a sense that maybe you had a shoulder injury. Do you?” He quickly replied, “Did I wince when you touched me?” I said, “No.” He said, “I was in a car accident years ago and my right shoulder never healed. I still live with the effects of the accident.”

WOW! The four of us were standing on that trail in what can only be described as the pure delight of God for this man. God was letting us know that He sees John. He knows John. He wants us, His children, to go love this child of His, and to tell John how much God loves him. I asked if we could pray a second time. John agreed and repeated, “I’m not a religious man, but you are the kind of religious I like.” We smiled and prayed a simple prayer, asking God to heal his shoulder. We shared a few more words, and John went on his way. The four of us slowly walked to a beach that was just below where we had intersected John on the trail. Justin encouraged us to each spend 10 minutes asking the Lord about the holy moment we just experienced. After praying, we came back together to share what we felt like the Lord was speaking to us. It was beyond special.

That was a first for me. I have seen many miracles. I have had miraculous experiences. God has come through for me, my family, and my friends in many amazing ways. However, this was the first time He showed me one of His sons that I would be intersecting just an hour or two later. God wants to share moments like that with us. Do we have ears to hear? Do we have eyes to see? Are we asking God simple questions like “What is on your heart today?” A mind stayed on the Spirit is life. Most of my life, I’ve made following God way too complicated. What if following Him is easier than we’ve made it? What if it’s just like breathing?